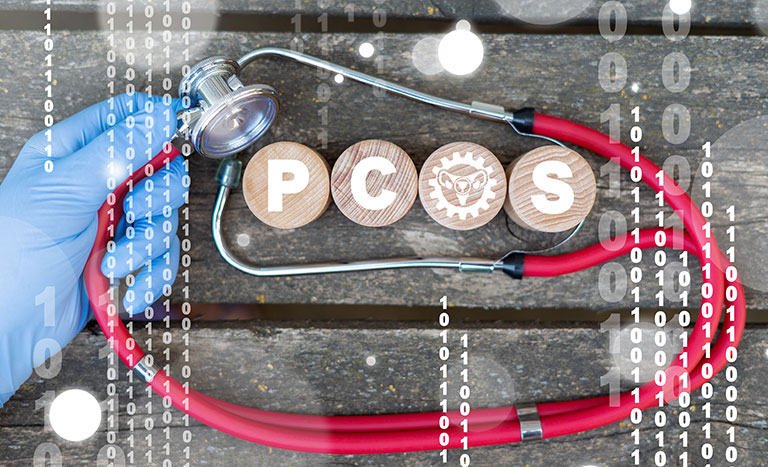 Polycystic ovary syndrome, often abbreviated to PCOS, is a general health condition that affects the functionality of a woman's ovaries. You can be diagnosed with PCOS if you have more than one of the following features:

Polycystic ovaries are made up of harmless follicles about 8mm in size. The follicles are developed in the sacs or tube where eggs are meant to be developed. These follicles make the release an egg difficult, thereby preventing ovulation. PCOS is very common amongst women in the UK — it affects about one in every five women in the UK even if they do not have any symptoms.

Apart from fertility problems, you may stand a higher risk of developing health problems such as diabetes and a high cholesterol level later in future. If you suspect you may have PCOS, seek the attention of your GP immediately for a diagnosis.

PCOS mostly causes infertility in females. Some women may not know they have PCOS until they fail to get pregnant after many attempts. For a woman to get pregnant, the ovaries must release an egg during each menstrual cycle. However, women with PCOS may not ovulate at all or do so irregularly, which makes falling pregnant significantly more difficult.

Women may stand higher chances of developing endometrial cancer (cancer of the womb lining) if they have had absent or irregular periods - defined as fewer than 3 - 4 periods a year for an extended period. The risk of having endometrial cancer can be minimised with treatment such as the use of contraceptive pills and intrauterine system (UIS).

The reason for PCOS has not been clearly outlined, but there is some evidence to indicate an inherited aspect to the condition. Some of the causes of PCOS may include resistance to insulin, hormonal imbalances and genetic factors.

The purpose of insulin is to regulate sugar levels in the blood— insulin helps the pancreas to move glucose from the blood into cells, where it will be broken down to produce energy.

The term ‘insulin resistance’ means the tissues of the body are resistant to the effects of insulin. As a result of this, the body will have to increase its insulin production in order to achieve the same effects. This causes levels of insulin in the body to accumulate, causing the ovaries to produce more testosterone than expected. It is this excessive production of testosterone interferes with the development and release of eggs in the ovaries, which prevents regular ovulation.

One of the symptoms of PCOS is to be overweight, and insulin resistance increases weight gain, which worsen the symptoms of PCOS, as having excess fat causes the body to produce even more insulin. As such, a negative feedback loop can occur in overweight women with PCOS, worsening the condition and it’s symptoms.

The cause of PCOS in some women is genetic. You have a high risk of developing PCOS if any of your relatives such as mother, sister or aunt, have PCOS. There is no specific gene associated with PCOS, but the fact that it runs in the family shows that there may be a genetic link.

The first step to diagnosing PCOS is to see your GP if you notice any of the symptoms. Your GP will discuss your concerns and examine you thoroughly, which may include some scans or blood tests. You may need to take some hormonal tests to know if an increased level of hormone production is because of PCOS or another hormone-related condition.

An ultrasound scan may be needed to determine if you have a high number of follicles in your ovaries (polycystic ovaries). The follicles are fluid-filled sacs where the eggs (ovum) develop. A blood test is also needed to check your hormone levels and screen for diabetes or high cholesterol.

In diagnosing PCOS, doctor look for at least two of the diagnosing criteria after all other reasons for the same symptoms have been ruled out. The three diagnosing measures for PCOS include:

When your GP diagnoses you with PCOS, it is recommended to commence treatment immediately. Your GP may treat you or offer a referral to a gynaecologist or an endocrinologist. Your GP will talk you through recommended measures such as lifestyle changes that will help you manage the symptoms, and any relevant medications will also be recommended.

You will need to go for a regular check-up if you are diagnosed with PCOS, which will involve the checking of your blood pressure and your blood sugar level (diabetes).

Polycystic ovary syndrome (PCOS) has no cure —although the symptoms can be managed. There are different treatment options based on their effect. We have discussed the various symptoms below.

Losing excess weight can help reduce the symptoms and also the risk of developing health issues for overweight women who have PCOS, as discussed above, excess weight in women with PCOS can greatly exacerbate the condition by a negative feedback loop.

Calculating your body mass index (BMI) can help you know if your weight is healthy or not. A BMI that ranges between 18.5 and 24.9 is ideal — regular exercise, eating healthy, and balanced diet can help you lose weight.

Your GP can always refer you to a dietitian to help you with dietary advice. You should always include plenty of fruit and vegetables in your diet and also food such as lean meats fish, chicken and whole grains such as wholemeal bread, cereals and brown rice.

Different medications can be used to treat various symptoms associated with PCOS. These will be discussed below.

When experiencing irregular or absent periods, your doctor may recommend contraceptive pills to induce regular periods. An intermittent course of progestogen tablets can also be used to cause periods — these are usually prescribed every three to four months. This treatment, as well as other hormonal methods of contraception such as an intrauterine system (IUS), help to reduce the long-term risk of developing endometrial cancer (cancer of the womb lining) that is associated with PCOS.

Taking some medications can help women with PCOS in falling pregnant.

When women with PCOS want to get pregnant, Clomifene is usually the first treatment that a gynaecologist will recommend. This treatment helps you to ovulate every month.

Metformin may be used if Clomifene did not induce ovulation successfully — this treatment can also be used to treat type 2 diabetes since it also helps to lower insulin and blood sugar levels in women with PCOS. Apart from inducing ovulation, monthly periods and reducing the risk of miscarriage, it can also help decrease the level of cholesterol in the body, which helps in the reduction of the risk of heart disease.

Treating PCOS with Metformin is not yet licensed in the UK, but can be used as an ‘off label treatment” in some circumstances to control the symptoms of PCOS. There are some side effects which may be associated with metformin; they include loss of appetite, nausea, vomiting, stomach pain and diarrhoea.

Since metformin stimulates fertility, you should use it with contraceptive if it is for treating PCOS alone without the desire to fall pregnant. The National Institute for Health and Care and Excellence (NICE) can provide you with an additional guidelines about the use of metformin for treating PCOS in women who are not trying to get pregnant.

Letrozole can be used to stimulate ovulation sometimes instead of clomifene. It can also be used to treat breast cancer. Using letrozole for fertility treatment is not yet licenced, except for treatment of breast cancer. However, doctors can sometimes use some unlicensed medications for PCOS if its benefits outweigh the risks associated with it.

Gonadotrophins may be recommended if you still don’t get pregnant after using a series of oral medications. There are different types of gonadotrophins given as injections, but there is a risk that they will cause multiple pregnancies due to overstimulated ovaries.

When these medications are used, they stop the effects of male hormones such as testosterone, and some may also suppress the production of these hormones in the ovaries.

Unwanted facial hair growth can be reduced by applying a cream known as eflornithine — the cream does not remove hair or cure unwanted facial hair, but it inhibits its growth. You may need to use this medication between 4 - 8 weeks to see the result. Other methods you can use to remove your excess hairs include plucking, shaving, threading, creams or laser removal.

Some other problems associated with PCOS can also be treated with medications. This include:

Some women with PCOS have an increased risk of pregnancy complications because of symptoms such as high blood pressure (hypertension), pre-eclampsia, gestational diabetes and miscarriage. The chances are higher if you are overweight; however, you can try losing some weight before getting pregnant.

Do you have any symptom of polycystic ovary syndrome? Visit Gynae UK on Harley Street for diagnosis and treatment. You can also send us a mail or call us on 02071830692 today.