Fibroids also be referred to as uterine myomas or leiomyomas — they are non-cancerous growths that develop in or around the uterus, often occurring during reproductive years in women. Their growth differs in size and is made up of fibrous and muscle tissues.

The symptoms of fibroids are not typical, and most times, it is diagnosed by chance during a routine gynaecological check-up. Most women are unaware of the growth because there are no visible symptoms. Only 1 in 3 women notice the following symptoms associated with fibroids.

Even without these symptoms if your GP thinks you have fibroids, you will be referred for an ultrasound scan. 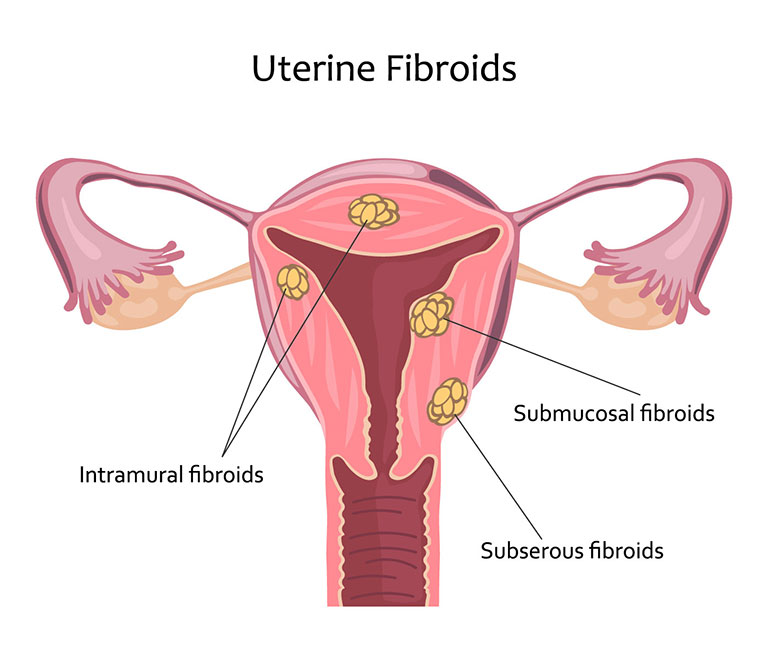 The exact cause of fibroids is yet to be discovered, but it has been established that there is a link between the female hormone-oestrogen and fibroids because fibroids usually develop in women during their reproductive years (16 - 50) and decrease as the oestrogen levels become low (menopause).

Oestrogen is the principal female hormone produced by the ovaries. It controls the development of female secondary sex characteristics and reproduction.

Who Can Develop Fibroids?

One in every three women develops fibroids at some point in their life. It is a common condition in women between ages 30 – 50. This condition is said to be prevalent amongst African-Caribbean women and obese or overweight women. Obese women experience the production of high levels of oestrogen in their body. The risk of developing fibroids is quite small in women who have had children and decreases more as a woman gives birth to more children.

Fibroids are of different types; it varies in size and the location of the growth. The size of fibroids ranges from that of a pea to the size of a melon.

The main types of fibroids include:

While some diagnosis of fibroids is conducted during routine gynaecological examinations, there are specific tests carried out in hospitals which your GP may request that you undergo to confirm if you have fibroids and rule out other possible causes of fibroid-related symptoms you may be having. Some of these tests include:

You may not need treatment for fibroids if there are no symptoms or if the symptoms are mild and do not have any significant effect on your daily activities.

Fibroids can also shrink without medication after menopause and the symptoms usually disappear completely.

In some cases where treatment is required, your GP will either prescribe medications to help relieve the symptoms or shrink the fibroids. If all these medications prove ineffective, then your GP will refer you to a gynaecologist for further help or surgery.

Medicines are often made available, but these can be ineffective depending on the size of the fibroids. Many of these drugs are also used to lessen the symptoms of heavy periods. Some drugs available include:

If you still experience fibroid related symptoms while taking any of the symptom reducing medications, then your GP may have to refer you to a gynaecologist and the following medications may be prescribed to help shrink the fibroids.

A moderate to severe symptoms but unable to have surgery. More than a course of medication is often required.

In some cases, Ulipristal acetate causes liver damage. Your GP will ask you to run several blood tests before, during, and after taking this medication to monitor the health of your liver.

Ulipristal acetate is not suitable for women with existing liver conditions because it may increase the chances of having liver damages.

If any of the following symptoms occur while taking this medication, you should contact your GP immediately:

Stomach pain on the upper right side of your body

All these symptoms are also an indication of liver damage.

Surgery is considered when the symptoms are severe, and other forms of treatment are not sufficient. There are different surgical procedures available; a gynaecologist will discuss all the options available stating their benefits and risks to you.

The non-surgical procedures used in the treatment of fibroids include:

The procedure uses several ways to remove the lining of the womb, and it includes:

Hot fluid in a balloon

This procedure takes about 20 minutes under a local or general anaesthetic to completed, and you will be able to go home the same day.

Vaginal bleeding and tummy cramps may be present for a few days, although some women experience bleeding for up to 4 weeks.

Some women also have severe pain and prolonged pain after the procedure. When this occurs, you should consult your GP.

Getting pregnant after endometrial ablation is possible, but this procedure is not advisable for women who want to conceive because of the increased risk of a miscarriage associated with the process.

There are two new MRI-related techniques are now available for the treatment of fibroids; they include:

These procedures use MRI to guide small needles with laser or ultrasound energy to the centre of the fibroid.

MRI-related procedures cannot be used to treat all kinds of fibroids. The long-term risks and benefits of these procedures are not yet known since they are relatively new and should be taken into consideration. Although some evidence shows that when they are carried out by an experienced clinician, this procedure has short to medium-term benefits.

In most women, there are no symptoms of fibroids. Still, some significant problems can be observed as a result. Complications also occur depending on factors like the position of the fibroids and their sizes.

Some common complications of fibroid include:

Where fibroid is present alongside pregnancy, it can impede the development of the baby and cause further difficulties during labour.

It is conventional for women with fibroids to experience abdominal pain during pregnancy and also to have premature labour.

If the fibroids are large and it blocks the vagina, then a caesarean section may be necessary to deliver your baby. In rare cases, fibroids can also cause miscarriages.

Fibroids can prevent a fertilised egg from attaching to the lining of the womb or prevent sperm from fertilising the egg. Submucosal fibroids that grow from the muscle wall into the womb may block any of the fallopian tubes, making it difficult for a woman to become pregnant.

If you need more information about fibroids, you can visit our gynaecological clinic in Harley Street, London. Or you can place a call to us on 020 7183 0692 today.